First published by JRS East Africa.
Empowering Refugees, IDPS & Host Community through Computer Literacy in Gendressa Camp
After recruiting roughly 117 (106 males, 11females) Computer Course Trainees, JRS Maban Computer Course commenced on January 24th, 2022, however the learning continued through April 25th, 2022.. The JRS Computer Skills Tutors had to move everyday morning to the field site carrying a total of 41 laptops, Projector, and a power generator.
During the class sessions, we had to divide the learners in groups of 3 with groups attending either morning or afternoon classes. Each class had about 40 trainees. Some traveled far distances and we had to help them return home with the help of our JRS vehicles especially the one carrying their young babies and babysitters. It was so interesting to see young and adults so eager to learn this new technology that they had never seen before. During the first two weeks, they suffered from wrist pain due to keyboard typing we initially introduced them to. They were also shown computer hardware & software applications during the Computer Essentials course, which is module one under ICDL. Module one takes about one month since the learners are new to the computer parts. Modules two through four were dedicated to a variety of programs in the Microsoft Suite.
An advanced computer course was offered to those who had learned the basic Computer Skill levels in previous trainings of 2021. After they completed the advanced course, they were transported to JRS Compound to learn internet and printer usage. Under the module of internet & printing, the advanced class had to create their email and social media accounts 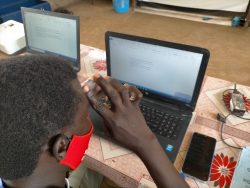 Their overall training was completed on April 25th, 2022 and the computer course students were issued certificates  on 10th June 2022 accompanied by a closing ceremony attended by Camp leaderships, CRA, Payam Administrator of Jinkuata, ACTED Representative and JRS field staff. JRS received a lot of appreciations from Camp leaders and host community leaders and urged JRS to continue providing computer literacy to their needy communities.
In the future, the JRS computer course program will feature photoshop. There is currently a plan to open internet centers in the camp which will motivate a  students as it will facilitate their communication with the outside world. We also have a plan of introducing computer literacy to the primary schools of St. Mark and Hufra.