By Dr. James M. Dahle, WCI Founder
One of the most important principles of economics is that people respond to incentives. That makes it unfortunate that there are so many things in life that incentivize us to earn less money. These “perverse incentives” or “moral hazards” can result in lower tax revenues, fewer goods and services available, and less general prosperity. As a general rule, you incentivize what you want to see more of (classic examples in our economy are education and healthcare) and you tax what you want to see less of (tobacco and alcohol, for instance.) Since we tax income, that results in, you guessed it, less income.
However, there are far more incentives to make less money than just taxes. Today, let’s go through all of the ways we are incentivized to make less money.

The most noticeable way that we are all penalized for making more money is that additional income is taxed at ever higher rates. If you earn $30,000 and make an additional $100, you lose $10 or $12 of it to the taxman. If you earn $3 million and make an additional $100, you lose $37 of it to taxes. It isn’t JUST that you pay more taxes, it’s that you also pay a higher percentage of your income as tax. I’m not saying this is right or wrong; I’m simply pointing out that this is the way it is, and it has consequences.
More information here:
How Tax Brackets Work

The less money you make, the more tax credits you become eligible for. Here is a list of common tax credits:
Many of my readers are phased out of most or all of these credits. If you make a million bucks a year, you don’t get any of them.

Whether you call it a subsidy for low earners or a fee for high earners, the Medicare Part B Income Related Monthly Adjustment Amount (IRMAA) means that some people pay $6,060 more for Medicare Part B than others do.

Income Driven Repayment programs like IBR, PAYE, and REPAYE are based on, well, income. The higher your income, the higher your payments.

If your calculated REPAYE payment becomes larger than the accrued interest on your student loans due to a higher income, then you no longer get your interest rate subsidized. 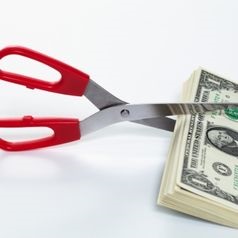 Pell grants to pay for college are not available to high earners and their children.

Colleges and other entities that offer scholarships, grants, and loans often restrict most of those to people with a calculated need. Some elite schools don’t charge tuition at all to students from families with less than a certain income.

High earners can still contribute through the Backdoor Roth IRA process. But some high earners can’t do that because they’ll get pro-rated, and there are other high earners who can’t seem to do the workaround properly.

While 529s have no income limits on contributions, ESAs do. OK, this isn’t a big deal, but it is one more tiny incentive to earn less.

Guess who can’t cash out their savings bonds without paying taxes on the earnings if the proceeds are used for education? That’s right, high earners.

Remember that stimulus check you got in the spring of 2020 and 2021? Me neither. Again, not saying it’s right or wrong; it’s just the way it is. One more way you are incentivized to earn less.*
*To be honest, business owners generally received far more money than their employees as part of these packages. Those people are generally, but not always, higher earners. I’m sure there are at least a few people out there that got both types of stimuli-personal and business payments.

Eighty-five percent of Social Security income is taxable. Unless you earn below a certain amount. Then, it is tax-free. At least it’s not 100%.

There are a lot of people in this country that really, really hate “the rich.” They don’t necessarily define it by whether the rich are wealthy or whether they are high earners, but it honestly doesn’t matter, does it? Here are some examples: 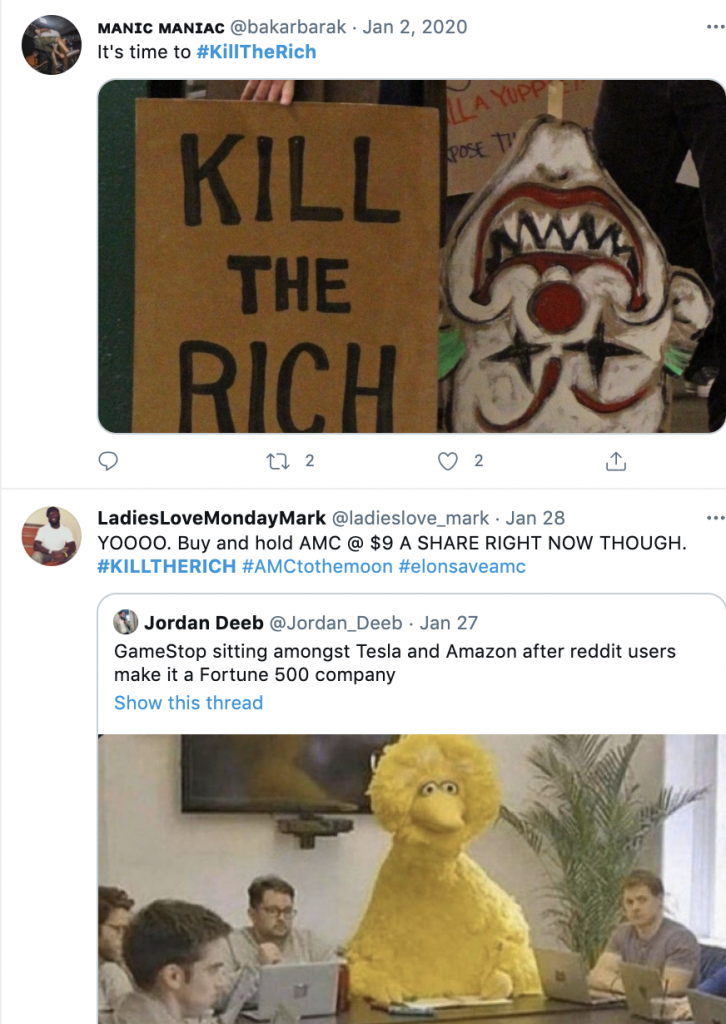 Some people just want to kill the rich. However, others won’t stop there. They actually want to eat them, too. Even high earner Steven Tyler wants to partake in that activity. People got especially hungry during the meme stock phase of 2021. 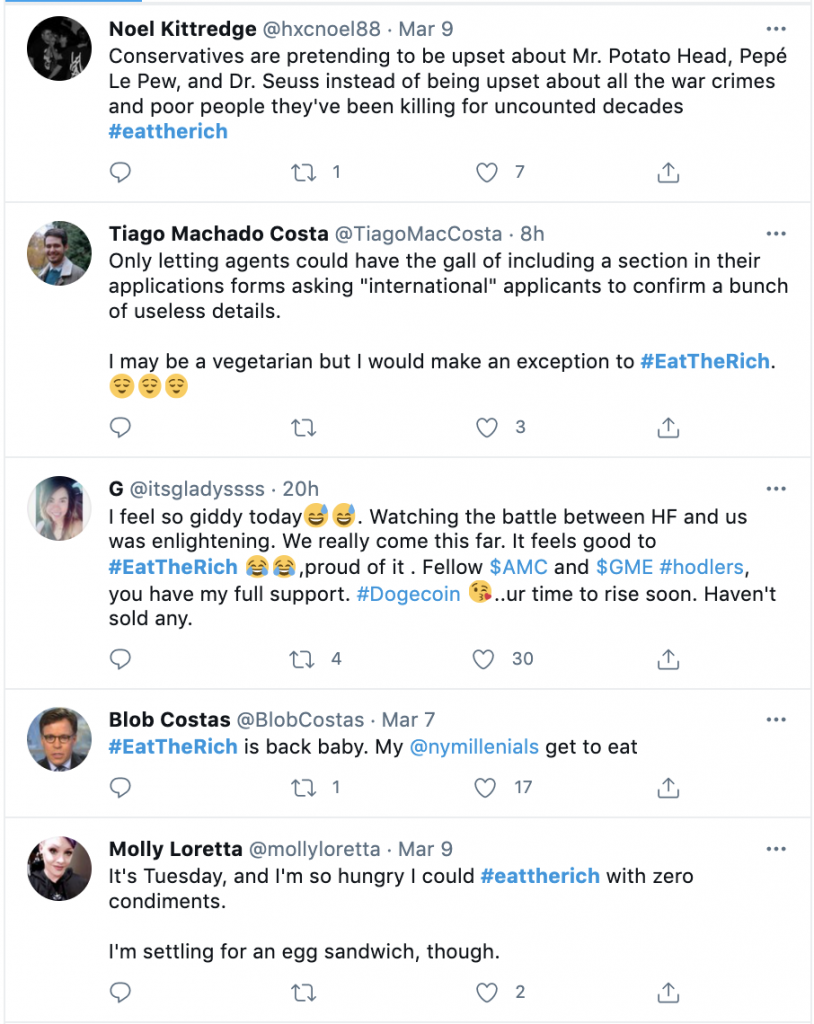 I found these hashtags somewhat fascinating. I actually searched to see if anybody was advocating for killing and eating the poor (they weren’t, at least not for the last few centuries). Granted, a large percentage of these people are presumably joking and/or speaking metaphorically. But it only takes one.
At any rate, this is one great incentive to earn less. You can “fit in a lot better with regular people” and nobody is going to try to kill or eat you. Envy can be ugly—and maybe even violent too.

OK, let’s get real here for a minute. Yes, there are A LOT of ways in which you are incentivized to earn less. Even very wealthy people respond to these things. Just read a few FIRE blogs for a couple of months, and you’ll find bloggers showing you how to get PPACA subsidies, avoid IRMAA fees, and score Saver’s Credits. But the truth is that there is also a lot of incentive to earn more. The main one is that when you earn more, you have more. Remember that extra $37 in tax that the million-dollar earner had to pay for that extra $100 in earnings? They also got to keep $63. They could do anything they want with it. They can spend it, save it, invest it, or give it away. In fact, if they give it away to charity, they don’t even have to pay that $37 in taxes on it.
I definitely prefer the financial freedom, security, opportunities, and ability to help others that come with being a high earner—despite the plethora of incentives to earn less.
What do you think? Did I miss any other incentives to earn less? Have you changed any of your habits or plans in response to these incentives? Comment below!
There are certainly many incentives to earn less…and some to earn more. Your post brought up several disincentives I was not aware of. Incremental discretionary income comes at a cost for most people. The cost is trading more time (life hours) for money.
Every hour of life I spend pursuing more income is an hour of leisure I did not get to enjoy. It’s rare that a work hour is as enjoyable as leisure. I have known people who like their work as much as leisure activity, but not many. I do not.
Now that I’m semi-retired, I value my leisure time even more as I have tasted total freedom. When my two work days or a quarterly long inpatient weekend roll around, I get through them, but am thinking of being free again. Don’t get me wrong, I do the work to the best of my ability, but I am always happy to get back to total freedom. It can’t be beat. It really is “all that and a bag of chips.”
For me, the tax jump from 24% to 32% was one of the largest disincentives to trading more life for money to have “more freedom, security, and ability to help others.” It kicks in at $340K for married couples. I will be dropping from the 32% bracket to the 22% bracket in 2023 due to my much smaller tax footprint from working much less by choice.
I have plenty of “not working” to do. I’m doing more hiking, swimming, writing, reading, traveling, and spending more time with my children.
My inpatient side gig pays well. I can always do more of it. I can choose to trade a few days of life for money. Right now, I do it once a quarter. I used to work most holiday weekends. Since it goes on top of my W2 wages, and is also subject to self employment taxes, it is stepped on with a huge tax foot….Bigfoot size. I have some deductions against it, but with paid malpractice, these are mostly lodging, some travel food expenses, health insurance premiums, and mileage. Sometimes, I think it’s not worth the net income after taxes and expenses, but it pays for more travel and I like eating at restaurants.
Having already worked 40 of my 58 years (I count ALL my work years, the last two years of medical school and all of residency), I’m happy to work just two days a week, and I think even that will not last. Total freedom is simply better. Freedom and leisure beats work badly, hands down. That’s a big disincentive to work. Always has been.
Surprisingly, about two-thirds of employed Americans say they would keep working even if they won $10 million in the lottery. I always thought most people would quit work if they won the lottery. I guess I’m in the lazy third, or the group who can find enough meaning outside of work.
I found this quote: “These high percentages of people who plan to keep working have remained relatively constant over the years: A study published in 2010 in the Journal of Applied Psychology found that from 1980 to 1993, an average of 73% of workers in the U.S. said they’d keep working even if they no longer needed to for financial reasons; from 1994 to 2006, roughly 68% said the same.”
In 2023 when my voluntary wage drop kicks in fully, it will be interesting to “see what I qualify for” that I didn’t in the past due to working two jobs and twenty weekends a year to be a “high earner”. Along the way, I took note of many things that did not apply to me as a “high earner.” Thanks for the comprehensive list.
Its not that people hate the rich, its that they hate themselves for not being rich. Its jealously. Its anger at themselves. Just like that bully in school picking on their victim is never about the victim, it is always about the bully and dysfunctional social issues at home. I’m pretty sure nobody would argue with someone giving them a few million dollars and then they would become rich (other than the Joker)
The full phrase, by Jean-Jacques Rousseau, is “When the people shall have nothing more to eat, they shall eat the rich”. Apparently it’s from the 18th century. Interesting that this phrase is making a come back.
Your email address will not be published. Required fields are marked *


The book summarizes the most important information on the blog and contains material not found on the site at all. Straighten out your financial life today! Also available on Audible!
Click to learn more!
Any one may so arrange his affairs that his taxes shall be as low as possible; he is not bound to choose that pattern which will best pay the treasury; there is not even a patriotic duty to increase one’s taxes.