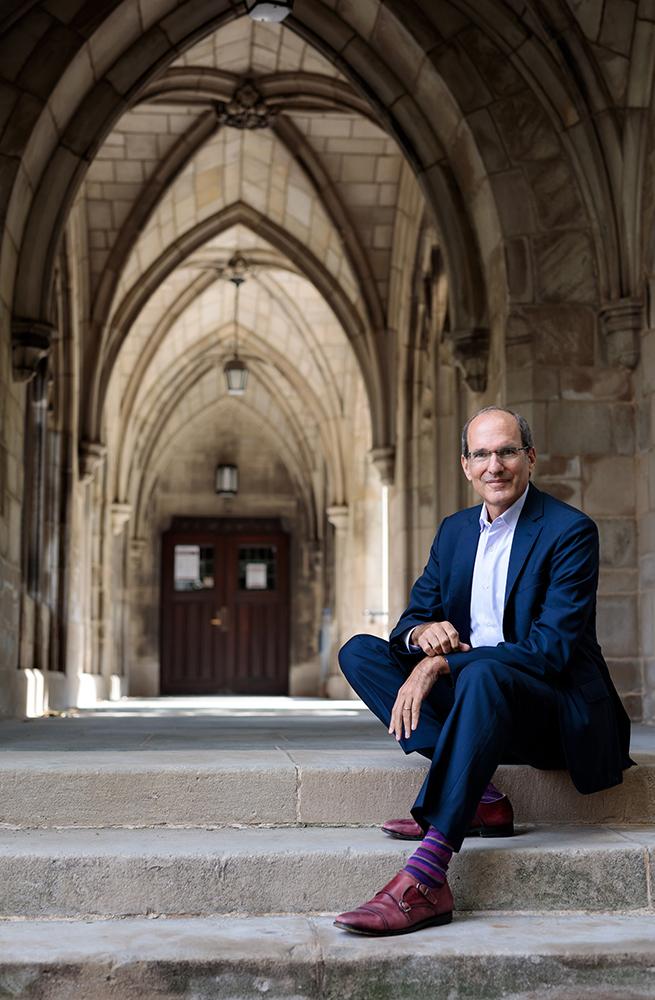 David Nirenberg *92 sees connections everywhere. As a professor of medieval history, he charted the relatedness of Jewish, Christian, and Islamic thought in different eras. As a dean at the University of Chicago Divinity School, he championed a program to promote collaborative ideas across the university.
As the new director of the Institute for Advanced Study, he said he plans to harness its deep resources to get people who might not be natural collaborators thinking and working together. His background in the humanities stands out from past directors, who overwhelmingly have been scientists and mathematicians.
Nirenberg, who became director in February, says he hopes to encourage more overlap between different areas of the collective brain trust that the institute has. For example, he points to algorithms — computational approaches for just about everything that determines how we live. “Can we bring together our mathematical computer scientists with our social scientists and humanists to think about the impact on society of algorithms?” he asks. Doing so could help detect bias in algorithms and make them more fair and robust for the future.
Integrating the views of behavioral scientists and humanists early on in science and technological questions can also avoid problems that naturally arise, he says. “By the time you get to the technical intervention to solve a health problem or a climate issue, you have passed a lot of behavioral answers along the way.”
Read about more Tigers of the Week
Nirenberg grew up in a Spanish-speaking household in upstate New York, which he says inspired a lifelong attraction to conversations across languages, religions, and cultures. “I have always been interested in what each part of our culture brings to thinking about a problem and how all these parts relate to each other,” he says. His academic work also follows similar outlines: He studied the ways that Islam, Judaism, and Christianity shaped thought in the other religions. He also penned a book — cowritten with his mathematician father — that explores the sameness in different forms of knowledge, from poetry and dreams, to monotheism, math, and physics.
The Institute for Advanced Study was founded in 1930 in Princeton as a home for theoretical research and intellectual inquiry, and has four schools: Historical Studies, Mathematics, Natural Sciences, and Social Sciences. Scholars there have made discoveries that have transformed their academic fields, from mathematics and physics to anthropology and art history. With no classes to teach and no research grants to chase, faculty can spend their time working on their own goals. It has been a space of scholarly freedom for many prominent scholars — including Albert Einstein, J. Robert Oppenheimer, Freeman Dyson, and John von Neumann.
Bringing all those powers together in a coherent way can make a difference in the future, Nirenberg says. “The specialization of generating knowledge is clear, but it’s also clear that’s not enough,” he says. “We have to find ways to bring the powers of different specialists on problems, and we have to translate into ways our fellow humans can understand.”
In order for society to achieve anything major, he says, it takes transformation at the level of the stories people tell each other and the knowledge we achieve — the values we hold together. And those aren’t achievable by any one discipline. “Without things like the novel, philosophy of rights, or humanities, democracy was inconceivable,” he says. And that’s true for problems we face today: If people want to change their behavior and society to battle the climate crisis, they need to approach the problem from a social, narrative, and ethical point of view.
Nirenberg was a visiting scholar at the institute in 1996, and remembers the connections being forged across boundaries — which he hopes to foster as director. “What brought me was the beauty of the conversation between an immense collective world brain in one place,” he says. “Every year several hundred of the most interesting people on the planet come together, and who wouldn’t want to be part of that?”
Dan Porter ’88 transforms sports; Adlai Stevenson 1922’s impact; The truth about dog years.
View Current Issue
Dan Porter ’88 transforms sports; Adlai Stevenson 1922’s impact; The truth about dog years.
View Current Issue
Tell Us What You Think
Use our simple online form to share your views with other PAW readers

Dan Porter ’88 transforms sports; Adlai Stevenson 1922’s impact; The truth about dog years.
In This Issue
From The Editor
Download PDF
Parents and non-alumni can receive all 11 issues of PAW for $22 a year ($26 for international addresses).
Let’s Get Started
© 2022 The Trustees of Princeton University